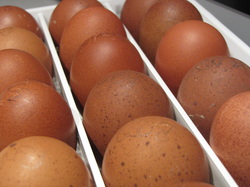 Not all marans are created equally.

Some strains or varieties are known to lay darker eggs then others. The black copper marans is known to lay some of the darkest eggs while hens of the cuckoo and birchen variety lay lighter colored eggs. If you are looking for marans for only the egg color, be sure to research the parent flock you are buying from! Very often we have folks who ask us why their cuckoo marans pullets they bought elsewhere lay such light eggs compared to the marans at Briarwood poultry. This is because our marans are sourced from flocks that lay the nicest dark brown eggs we can find! We do a great deal of research before we bring new lines into our flock, and when we do we only breed the girls that are sound conformationally as well as lay a dark egg. Hope this information helps to guide you in your search for marans!

Unfortunately Marans are difficult to hatch, mainly due to their hard, dense shell. However, they are easily one of the most beautiful eggs to look at, and the hens they come from are wonderfully calm and physically striking.

" The shell  represents approximately 10% of the weight of the egg. In the Marans, when optimum conditions are met, one notes that the solidity of the shell is greater  than that of eggs of other breeds.


Even when the  empirical observation is easy (when one breaks a Marans egg, it is
often with a  certain difficulty), no scientific proof had attested it until a group of  students (promotion 1995-1997) of the Institute des Sciences et Vie de la Terre  (I.S.V.T.) of Puy en Velay studied the extra-russet-red eggs of the Marans.

According to  measurements and calculations carried out, we could highlight which Marans hen’s  eggs had a more solid shell than that of traditional eggs.

These would  thus have considerable advantages for marketing, decreasing the number of
potential breakages during transport, and the storage time of these eggs is quite longer than that of traditional eggs.

The thickness  and the solidity of the eggshell of the Marans is now scientifically
shown.

It is precisely  the thickness of this less porous shell with a fine and tight grain
which, but  decreasing the gaseous exchange, avoids the oxidation of its
contents: the air  penetrates with difficulty into the egg and its conservation
is somewhat  prolonged.


This lower  permeability often causes decreased hatchability of approximately 5 to
10%  compared to majority of other breeds."
- http://www.marans.eu/loeufang.htm#loeufang